I hope you all have great birthdays and Many Happy Returns to every one of you.


This entry was originally posted at http://beren-writes.dreamwidth.org/352388.html.

I did mean to post this with the birthdays, but DW had other ideas - managed to hit a key that posted the entry before I was ready for it, hence my weekend has its own post :).

Rob and I had a long weekend away from everything and pampered ourselves, it was wonderful. We haven't been away as a couple in quite a long time and it was so much fun.

We went to Cheltenham and stayed in a lovely luxury B&B called Beaumont House.

It's a beautiful old house as you can see and it has been done out so well. All the rooms are top notch. Our bed was huge Hypnos bed and it was so comfy. We also opted for the Romantic Stay option so we had Prosecco and Choccies waiting for us when we arrived. The breakfasts were also wonderful (smoked salmon and scrambled eggs for me - so yummy). I left a full review on TripAdvisor if you'd like to see.

It was quite funny because we arrived and had all this romantic stuff in our room and what did we do? Sat down, had some bubbly, ate some choccies and watched Quincy on TV - LOL. We wanted a nice rest before we went out to dinner in the evening :).

We went to the Daffodil for dinner - a very nice restaurant. It's in a converted cinema and it has a 20s theme. Fine dining with some amazing food. We had the tasting menu and it was wonderful. Only hangup was the wine flight to go with it - I think someone had a job lot on French wines! Again I reviewed on TripAdvisor if you'd like to see what I thought in detail.

On Friday we headed to Stratford-upon-Avon because we had tickets to see Hamlet at the RSC in the evening. We went via a little place called Bourton-on-the-Water (they like their hyphens in Gloustershire ;)). Beautiful place and the DragonFly Maze is fun, but we were only there until about 11 and by then it was already heaving with people.

We also stopped off at Daylesford Farm Shop and Restaurant. Nice food, but over priced, I thought. However, run by very good staff.


When we reached Stratford we went on a River Boat Tour, which was more of a pootle along the river than much of a tour, but it was relaxing and fun. Then we had some food before going to the theatre. The current production of Hamlet is amazing. Paapa Essiedu is simply brilliant, there is no other way of putting it. I hope they put on an encore showing of the RSC Live version at the local cinema so I can drag the rest of the family along to see it :).

On Sat we went to Sudeley Castle and arrived as it opened. It's very beautiful and has some great exhibitions. 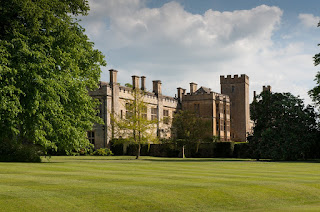 Yep - you guessed I left a review on TripAdvisor for this one too :)

Then we took a quick jaunt around the countryside and went back to our B&B before deciding where to go out to eat in the evening. There are so many lovely places to eat in Cheltenham that it was hard to decide, but we plumped on Moran's Eating House. Ignore the menus on the website - they've just changed them and the new one is excellent. Moran's may not have been as ponsy as The Daffodil, but the food was amazingly good. So very tasty. If you want a run down on what we had check out my full review on TripAdvisor.

We stopped off to visit with some friends on the way home on Sunday and it was simply the most awesome of long weekends. The only problem now if we have to go back at some point because there is so much to do around there.
This entry was originally posted at http://beren-writes.dreamwidth.org/352630.html.
Collapse