Was having a great dream this morning when I woke up - Star Wars combined with Guardians of the Galaxy, well, at least Peter Quill seemed to be in the Star Wars universe with Finn and Poe and Rey. There was lots of talk of sex, but they never did actually get around to it (well except apparently for Poe having taught Finn all about butt plugs - I can make no excuse for my subconscious ;)). No sex on screen, as it were, though - that was a little disappointing, but mostly it was just a highly entertaining dream.

There was one part where Finn and Rey were trying to gross out Peter and Poe with a whole raw fish. I think that was thanks to a horror short I saw the other day with someone eating a raw fish. 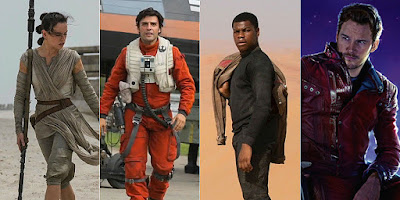 This morning I made the executive decision to reboot my PC. Now to most this might not seem like an event, but I choose when to reboot very seriously - it takes at least 10 mins minimum and today it took 30 before my PC was actually ready to use again. I kid you not. My PC is eccentric.

I have to wait until it has finished faffing around to be able to do anything. I have no idea what it does because half the time task manager won't start until it's done everything it wants to, or it tells me nothing useful. I just open gmail in Chrome and wait until it can actually log in - then, if I'm lucky the machine is usable. If not I have to twiddle my thumbs for another 10-15 mins while it continues to contemplate its navel. I think it is Win10 being funny about my virus checker and other stuff, but I can't be sure. Fun, fun, fun.

I only reboot when I really have to - y'know, those times when you can all but hear the creaks ;)

When it needs a restart my PC can get very interesting. For example, it starts opening windows on a fourth screen I don't actually have. In most cases this doesn't matter, I simply shift right click on the icon and move it back to an actual monitor. However, Word can't cope with this - it crashes.

I can get it to start acting normally again - I just have to go into display settings, change the aspect ratio on one of my monitors and then change it back again, but it's always a warning ;)

Sometimes my centre screen starts to flash on and off too - it goes black every time I try to use a window on it. This is fixed in the same manner. I assume it screws up the HD negotiations and then loses the plot.

I suppose if this was any other appliance I'd be horrified by the glitches, but it's amazing what we'll except from our computers isn't it? :) I keep considering rebuilding it from scratch, but it has so many software packages installed that I'd never get it back quite the way I want it.
This entry was originally posted at http://beren-writes.dreamwidth.org/350307.html.