I was planning a short lie-in this morning because I didn't get much sleep the night before last and I was catching up. No such luck!

The cat alarm this morning was Ruby, who, because she was bored, decided to climb on the top of the kitchen cupboards. Anyone who hasseen my kitchen knows that's where my cake boxes are stacked. Yep, I went from asleep to wide awake in under a second thanks to an almighty crash.

Amber is still asleep in her bed on our bed - which also says a lot about cats I think.

Have some Amber with a mint tea bag in a sock just because it's cute :)

I watched a bit of The Running Man yesterday because I haven't seen it in ages. 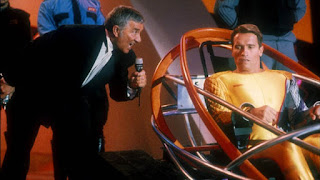 An Arnie 80s classic - a bit cheesy, terrible dialogue from the man himself and full of action.

It's a distopian tale where America is a police state due to resource shortages (not that we actually see a lot of that) and the government uses TV to indoctrinate the masses. The Running Man is the #1 TV show where criminals go up against "Stalkers" in a gladiatorial type arena in a chance to win their freedom.

Ben Richards (Arnie) was a police officer, but he refused to massacre unarmed people in a food riot and was convicted for actually doing so, becoming known as The Butcher of Bakersfield. He ends up on Running Man, but turns out to be more of an opponent than the "Stalkers" have ever faced before as the local resistance try to show the people they have been lied to.

I really must add it to my to watch pile and watch the whole thing to properly appreciate the cheese :).

Do you have a cat alarm clock? :) Have you seen The Running Man? Which is your favourite Arnie 80s classic?
This entry was originally posted at http://beren-writes.dreamwidth.org/346275.html.