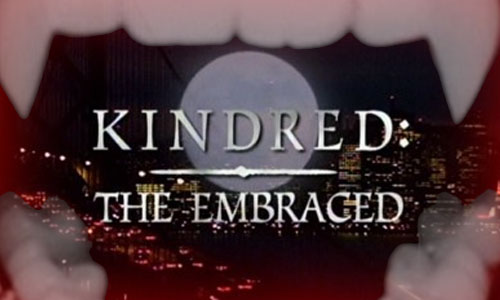 Okay, well since I'm just about to post a new Kindred: The Embraced Fanfic, I thought I would do a fandom intro, for those who haven't seen it or don't remember it too well. It seems I'm all about vampires at the moment :)

Kindred is a show about vampires that is loosely based on Vampire: The Masquerade by White Wolf. The vampires call themselves Kindred and to become a vampire a person is embraced, hence the name of the show.

A little background on the Kindred. They are divided into clans:
In the game there are 13 clans, and we will never know if any more would have been introduced because there are only 8 episodes.

In San Francisco, where the show is set, the Prince of the city is Ventrue, so all the other clans are subordinate to them. There is peace between the clans, but the Brujah are always causing trouble and wanting to take over.

Kindred can walk in the daylight as long as they have fed and there are Kindred in all walks of life. The most important things for all Kindred is the Masquerade: pretending to be human and blending in. Any Kindred who breaks the Masquerade forfeits their life and, more often than not, the life of those they have told. 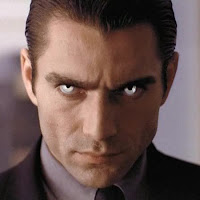 Julian is a Ventrue and very much a planner. He runs San Francisco by the law and does not take well to those who break Kindred edicts.

He can, however, be swayed by his emotions, especially love. The most important thing to him of all is family.

He had a relationship with Alexandra Serris and with Lillie Langtry, but finds himself drawn to Caitlin Byrne.

As prince, Julian treats his subordinates with respect, but those who cross him, beware. He can hold a grudge. When Eddie Fiori crosses him, the Brujah finds out to his cost, that it is a very bad idea. 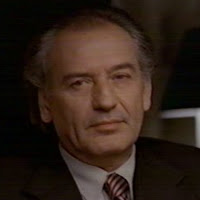 Archon is Julian's sire and was once Prince of San Franscico. He is now the primogen of the Ventrue clan and still lives in Julian's house as his advisor.

Archon was a much more ruthless prince than Julian. Julian was once his enforcer and when Julian laid down his guns, Archon knew it was time for a new leadership. He sees the future in Julian and believes he can maintain the peace.

Archon is willing to die for Julian. 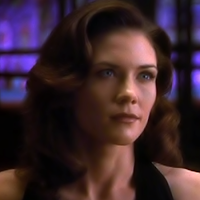 Beautiful and ruthless, Lillie controls the Toredor clan in San Francisco. She has the power to bewitch men, both human and Kindred and she is willing to use it.

In a relationship with Julian at the opening of the show, she does not take well to rivals. She wants Julian for herself, whether because she loves him or wants the power, is never quite clear.

When she is jealous she is at her most dangerous and no one should underestimate her. 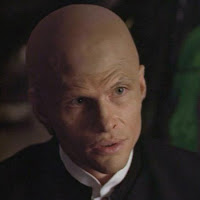 Daedalus is the calm and composed primogen of the Nosferatu clan and Julian's best friend. As with most of his clan, he lives below ground in the tunnels and rooms under the mansion where Julian resides.

He is logical and controlled, but when his underlying Nosferatu nature is aroused he can be very dangerous indeed. He can be a deadly enforcer for Julian.

A very intelligent being, he sometimes curses the heritage of his blood. He is loyal to Julian, but above that he is loyal to the peace between the clans. 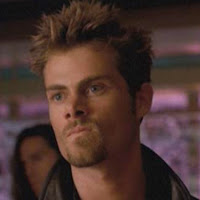 Street punk, more fond of his motorcycle than law and order, Cash becomes the primogen of the Gangrel clan and chief of security for Julian.

Loyal to a fault he can sometimes be too volatile.

He falls in love with Sasha, Julian's decendant, who knows nothing of the Kindred, but theirs is to be a star crossed love. 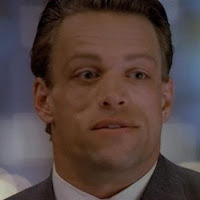 Viscious and brutal, Eddie is the primogen of the Bujah clan. He had a veneer of civility, but underneath he is simply a thug.

He wants everything: power, women, money, and is willing to do just about anything to get it.

Continually trying to get at Julian he will use all means necesary, uncluding traitors inside Julian's house, to see himself the next Prince of the city. 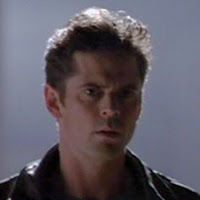 Frank is obsessed with bringing down Julian Luna, whom he thinks is a mob boss because of his connection to Eddie Fiori and the docks.

During his investigations he meets Alexandra Serris, Julian's previous girlfriend and falls in love with her. Through her he learns about Kindred.

Because he has made love to Alexandra and tasted her blood, he is no longer prey to Kindred mind tricks (although they do seem to forget this in one ep :)). He is continually after Julian, although when he realises who the real bad guys are, they do come to a kind of truce. 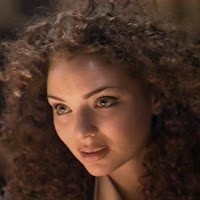 Sash is Julian's descendant whom he meets when attending the funeral of his last remaining grandchild. Sasha is Julian's great, great grand daughter, but he pretends to be just another relative.

Wild and headstrong she gets arrested in San Franscico and agrees to live with Julian after he bails her out.

She falls in love with Cash without realising anything about Kindred, only to find out in a very brutal and unfortunate way. 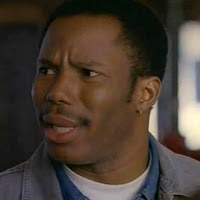 Sonny is Frank's long suffering partner in the police force, forever chasing after him in his mad schemes.

What Frank doesn't know is Sonny is Kindred and he's working with Fiori and Luna.


Caitlin Byrne (Kelly Rutherford) - Reporter and Editor of the Times 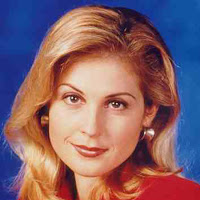 Caitlin is trying to do a story on "The Most Powerful Man You've Never Heard Of" - Julian Luna.

He grants her an interview as long as she agrees to answer his questions as well.

Caitlin falls in love with Julian, just as he does with her. She accepts when he offers her the editor's job at her paper after he buys it, but only on the condition that she is given free reign.

When asked if she has to shelve the article on him he tells her it is her call. Alexandra is over one hundred years old and she does not like to be told what to do.

She did not expect to fall in love with Frank and it makes her want to feel human again. She wants to run away with Frank, but Julian warns her of the dangers.

When she tells Frank about Kindred, so he has a chance to understand, she condemns herself. A blood hunt is declared and, after making Julian promise to keep Frank safe, she sacrifices herself.

Drained she jumps into the bay just as the sun catches her on fire.

It is unknown if she is alive or dead, in the TV version we last see her falling into the water, on the DVD there is a missing scene where we see her floating at the bottom of the bay and she opens her eyes.

Kindred have certain powers that all the clans share:


I have to admit I'm a little confused on the whole feeding thing, however. Nosferatu definitely have fang and claw, but the only other Kindred we see with them is Julian when Daedalus gives him the power.

However, Lillie definitely bites at least two people, which would suggest her teeth are very sharp and we see other Kindred bite as well. We also see Kindred using a sharp nail/claw to open a wound to drink from. Hence my head canon is that they all have them, just Nosferatu have better developed sets because of their more monstrous appearance.

Light can be a problem for Kindred, but only if they haven't fed. In the pilot they seemed to suggest it was more of a problem, but by the second ep they clearly decided that would be too much hassle. Hence all our Kindred are well fed unless the plot demanded they go up in flames.

Frank Kohanek is involved in the affair of his life with Alexandra Serris. He never meant to fall in love and neither did she and they both have a bone to pick with Julian Luna. As Kindred plots play out around him, Frank is drawn into their world, bit by bit.

Prince of the City

Julian has to defend himself and this place a prince from Eddie Fiori, who is also looking to take down Frank Kohanek. Julian also meet Caitlin Byrne, fiercest investigative journalist in the state, and sets out to seduce her, but is, in his turn seduced.

A newly turned Kindred, Starkweather, is mentally unstable and becomes a serial killer when he realises what powers he has, even though Cash tries to help him. Frank and Julian team up to catch him. Meanwhile Daedelus falls in love with a singer, Cash falls more in love with Sasha and Julian becomes more involved with Caitlin.

Julian and Caitlin become even closer, coming dangerously close to exposing the reality of his world to her. Cash and Sasha are also drawn together, but when the Brujah get involved there is a clan war on the horizon and blood at stake.

Lillie has a new vampire child, Zane, but he is wild and has embraced his Toreador side even more than she could have imagined. When his desires and needs threaten the Masquerade she has to make difficult decisions to deal with him.

The Rise and Fall of Eddie Fiori

Eddie is finally at his wits end with Julian's interference in his clan and their rackets. His numbers are down, so he calls in his sire, Silas, Prince of LA. Silas helps Eddie to plot against Julian and, in her jealousy about Caitlin, Lillie helps him.

When a human baby is stolen by two Nosferatu renegades, it threatens to expose the Masquerade and brings up some important memories for Caitlin. Julian does what he must as Prince of the city to keep all Kindred safe.

Cabin in the Woods

To save his relationship with Cailin, Julian agrees to leave the city with her for a long weekend. She takes him to a place Julian knows well. It was the scene of a Kindred massacre ten years previously. Unfortunately there are Brujah left in the area who want revenge on the perpetrator: Julian.

I enjoy all the episodes for different reasons, but I think my favourite is The Rise and Fall of Eddie Fiori. We get to see the wonderful Brian Thompson at his best, and the machinations of Kindred society up close. We also meet the Assamites, a nice glimpse into other Kindred possibilities.

I wish there were more episodes, but any chance of saving the show died with the tragic death of Mark Frankel in a motor cycle accident in 1996. They keep wanting to reboot old series, now here is one that never got a real shot, and would be perfect for all those wishing True Blood hadn't finished.