Rob and I have been in London the whole weekend and it was so much fun.

On Sat it was Eyetease's 6th birthday (the company Rob now works for) and we started at 6:30 in a bar and had took much Proseco, then we went to Burger and Lobster for, well, burger and lobster and cocktails (wow) and then we went to a Karaoke club for 4 hours and sang until none of us could sing any more :).

For the record all Rob's colleagues are nuts and I love them all and their other halves who are also bonkers. It was awesome.

We didn't get back to the hotel until nearly 3am.

But for some reason Rob and I were awake by 8:30. My poor love had a rather nasty hangover though, so we nipped round the corner to a greasy spoon and had breakfast. If you are ever near Aldgate - Peter's Cafe is absolutely lovely and the food is good.

We then lazed around a bit before checking out and heading for Hoxton, Shoreditch for a very late brunch (1:30pm :)) with Richard and Steph (Rob's boss and his lovely other half) at The Breakfast Club.

After that we headed off to Kensington to our second hotel - The Queens Gate to check in and get ready for our evening out. We went to see Cirque du Soleil, Amaluna at The Royal Albert Hall and it was stunning. The first half was the best IMHO simply because it held together better than the second half, but it was all absolutely amazing. We bought the DVD and watched it last night too and I think they had to leave certain things out because of the venue, which meant the second half was quite a bit different with some stuff missing, hence the plot not quite holding together properly :). 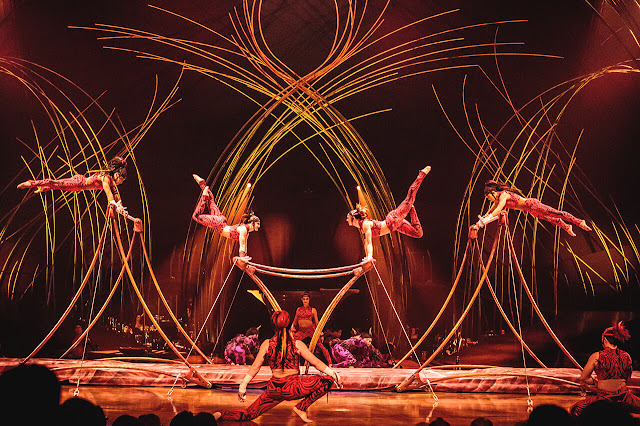 We actually managed to sleep in a bit on Monday morning, but still seemed to be at breakfast before most of the rest of the hotel not heading to work :). Must be our age ;). Then I finally got to see where Rob works before we came home yesterday afternoon.