NEW RELEASE- The Machine: Rise of the Gifted 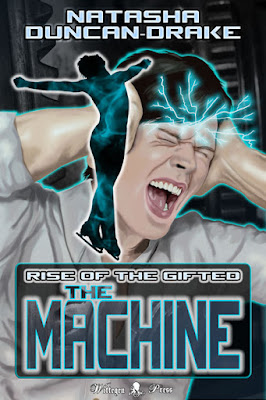 The Machine
Rise of the Gifted
by Natasha Duncan-Drake
Men in black aren't usually associated with figure skating, but when MiBs try to arrest men's champion Louis Hayes, his ex-rival Rafe Derouet finds out to his cost that telepathic x-files really do exist.
FREE 21st - 23rd Feb ONLY

Rafe Derouet used to be a world class, British figure skater competing against his arch rival, flamboyant American Louis Hayes. A catastrophic knee injury ended his career and now all he can do is look on from the sidelines, commentating where he used to be a star. He hates Louis and wants nothing more than to see his nemesis go down in a blaze of failure.

Then mysterious men in black with guns take over a press meet, trying to arrest Louis, awakening something dangerous in their target, and setting in motion events they cannot control. Most shocking of all, Rafe finds out Louis can literally read his mind.

Dragged into a murky world of government agents and x-files by one of those x-files, Rafe finds his world view completely changing. And, along the way, his hatred for Louis proves to be something else entirely.

Now Rafe just needs to survive so he can decide what to do about it.
Excerpt (Listen or Read)

Rafe was in a hurry.

Whoever had had the idea to produce a US/Russian/Chinese special sporting event in celebration of the new economic treaty that was going through had to have been insane. There was figure skating and speed skating, long and short track, in the dual arena and athletics on the field and gymnastics in another arena down the road. It was as if someone had stuck pins in all the sports they thought the various countries were good at and then invited all the top athletes from the three countries to compete.

It was completely crazy and the whole world was watching, which was why Rafe was there reporting on it.

Given the current political climate, everyone was hoping sport could settle some of the latest rumblings. Rafe was waiting for it to all blow up in the organisers’ faces.

He had too many things to do and not enough time to do them, which was why he wasn’t really paying attention to his surroundings. The messages from his producer and his agent were far more important at the moment. If he had been giving thought to anything but texts he would have picked a different route.

“Well look who it isn’t,” said an all too familiar voice with an annoying American twang.

Not that Rafe found all American’s annoying, just this one in particular. He looked up from his phone to see Louis ‘pronounced the French way, darling’ Hayes less than three feet away.

Before he had fallen in the previous year’s world championships and shattered his knee, Rafe had been Louis’ arch rival on the ice. Competing for the UK in men’s figure skating, Rafe had spent the last few years swapping the number one spots in various competitions with Louis, but that was all over now. After eighteen months he could skate again, but he would never be able to compete at top level. These days he was doing TV shows and reporting for European sports channels and Louis was still glittering up the ice.

It made him want to knock Louis’ perfect teeth in with one of his skates all the more.

“Hayes,” he said and then realised that Louis was not alone.

Joy of joys, possibly his other least favourite person was standing next to Louis.

“And Voronov,” he added, wondering which deity he had pissed off to end up with both of them in the same place.

Voronov was a long distance speed skater for the Russians. Tall, blond and very much not sparkly, Voronov was an unlikely friend for a flamboyant American figure skater, but the pair had met at their first Olympics, hit it off and been firm friends ever since. Louis was something of a Russophile and had even been to Voronov’s wedding two years ago, which, given that Voronov was something of a state hero, had been quite a big deal. Louis was also one of the few allowed to call Voronov by a ridiculous nickname like they were in a club or something.

Rafe had met Voronov at the same time Louis had, only their relationship had started off more as instant dislike.

The urge to deck the other man was strong. Rafe employed all of his skating will power not to do it.

“Places to be, important people to see,” he said, doing his best to get in a dig.

Of course he was all too aware Louis was much better at this game; Louis with his perfect hair and designer clothes and sycophantic fan base. It made Rafe grind his teeth.

“The competitors?” Voronov said, tone innocent, but Rafe couldn’t help it, he glared.

There was nothing more in the world that he loved than the ice and it had been taken away from him. He honestly had no comeback.

Surprisingly he saw Louis dig his elbow into Voronov’s side. Maybe their antagonistic relationship did have lines. Once upon a time he and Louis had been friends and practice mates under the same coach, but then they had somehow become rivals. Rafe still wasn’t sure what had happened, but he had become the British poster boy for the international ice skating federation and Louis had become the American rebel with amazing talent.

“So, who are you commentating for this time?” Louis asked, clearly trying to be nice after Voronov’s below the belt shot.

That just rubbed Rafe completely up the wrong way.

“The BBC,” he said, digging his fingers into his palm to keep himself calm. “Now I’m late for a meeting, so I have to run.”

“Aren’t you co-commentating with the lovely Maria Hessle?” Louis said before Rafe could get away.

“Yes,” Rafe replied, doing his best not to grind his teeth and damning the polite genes his family had handed down.

“I’m sure I read somewhere that you and she were an item,” Louis said, “how’s that going for you?”

Louis’ expression was completely innocent, but Rafe wasn’t fooled, it was yet another dig. When they had been friends there may have been some adolescent fumbling between them and Louis was well aware Rafe’s tastes ran more to the male than the female: yet another bone of contention between them, what with Louis being out and proud and Rafe being firmly in the closet.

“You of all people should know not to believe everything you read,” Rafe said, as sweetly as he could manage.

The one thing he had to be utterly thankful for was that Louis was not the kind to out anyone, not even an ex-rival. Louis had had to defend his own sexuality so much, even before being officially out, technically, that Louis had the integrity not to do that to someone else. Didn’t stop all the digs though.

“Maria is happily attached to a Polish plumber from Chiswick,” he added, because he couldn’t help trying to rub Louis’ nose in the ridiculousness of tabloid reporting.

“I find it always pays to check,” Louis said.

Every time they met it was the same with the subtle poking at his weakest points. And it galled Rafe to realise that he only understood his own sexuality so well because of Louis Hayes. He had done quite a bit of self examination over the years.

Louis clearly wanted to continue the conversation, but Rafe wasn’t sticking around to find out what for. The last thing his career needed was a headline about him trying to kill an American citizen on American soil.

Rafe was hovering, waiting for the next skater to come along for the press meet. It was currently Louis’ turn. He was supposed to have been interviewing everyone, but even his producer realised that asking him to interview Louis Hayes was a bad idea, hence his co-host, Maria, was doing it. He was in line to talk to the next skater in.

If Louis won things Rafe would have to bite the bullet, since he was the lead interviewer this time round. At least he could be thankful that it had turned out he was good as a celebrity commentator. However, these were just preliminary chats for sound bites, so he could get away with leaving it to Maria.

“Sorry, Ladies and Gentlemen,” a member of the event security team walked up to the gathering, “I’m going to have to ask you to move to a new area. This one is needed for warm up.”

That sounded odd to Rafe, because he was pretty sure no one was due on the ice yet today and he hung back. Louis looked equally put out, which was actually kind of funny. Rafe guessed Louis was bitching to his agent, who patted him on the shoulder, and followed the gaggle of press out as Louis went to make for the locker rooms. Rafe couldn’t resist stepping towards his ex-rival, just to see if he could get an annoyed sound bite. Those he was actually quite good at when it came to Louis.

Louis was trying to find something in his huge, oversized bag, by the looks of things, so Rafe waited for his chance. However, it never came. As soon as the press were out of sight men in black Kevlar appeared from several different places with guns. The truly bizarre thing was that they all seemed to be pointed at Louis.

“Nobody move,” was the shouted order and Rafe froze.

It was difficult for Rafe to believe what he was seeing and, if his face was anything to go by, Louis was just as shocked. Louis raised his hands, staring at the men in black with guns, clearly terrified. Frankly if there was anyone less likely to need a gun pointed at them Rafe had never met them.

“What’s going on?” Louis asked, sounding as confused and petrified as he looked.

“Don’t move,” was the only response and then a woman appeared.

The way Louis’ eyes opened slightly and a frown of confusion appeared on his face, replacing the complete shock, Rafe guessed Louis knew her…
FREE 21st - 23rd Feb ONLY