Sorry, I forgot to post NaNoWirmo Updates 1,2 and 3 here, but you can see them over at my Livejournal if you would like :).

As you can see from my graphic, my progress had been a little up and down. I am currently ~400wds behind thanks to my missed days (both the yellow ones were only about 200wrd days and red was none at all :)). However, I finally know who the murderer is! Yay!

For those who haven't seen my other updates, I was bemoaning the fact that I knew who all the players were in the novel, but I didn't know which one of them had committed the murder. For those who have seen nothing of me wittering on about NaNo at all, my novel is as follows:

Miri, or Mirabel if you're her mother, is a very powerful witch. When she wakes up on an obnoxiously bright morning she knows it's going to be a bad day. First of all her familiar, Ran, has decided being a cat is no longer interesting enough and has taken to walking around as a naked young man. Not good for her equilibrium, not good at all. Then she bumps into a friend, Ed Hanson, she hasn't seen in five years and she starts feeling the witch's mating urge. Think hornier than Sid James in a Carry On film, only worse. Being a demisexual with few close friends, this is kind of new and confusing.

Oh and her next door neighbour has been murdered, which might be a problem.

The idea is growing as I write and changing a little bit, but the basic premise is still there :). The time line is different, but it's still a murder mystery and Miri is still a witch with something of a personal magical problem. I'm having a lot of fun with it as the universe evolves.

I helped lay underlay last night! I know, this might not be news for anyone else, but I am completely D.I.Y. incompetent and I actually managed to help Rob without messing anything up. In fact I actually came up with some sensible suggestions. 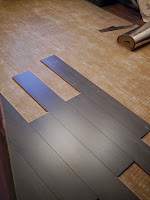 The flooring you can see in the picture isn't actually laid yet, it's just in place to make sure we didn't choose really badly and need to go and exchange all the packs we bought for something else :).

The underlay is actually thermal and you can see from the roll sitting to the top of the picture it looks quite space age when you can see the metal surface. We've laid 2/3rds of it, but we can't do the rest until we've put the floor down on the first part and can move the weights machine to where it will be in the room. 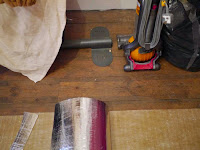 As you can see from this second picture, now we have taken out the old carpet and old lino that was on top of it, we actually have a rather nice old wooden floor. Unfortunately we learnt last time we uncovered one of the floors that they may look pretty, but they make for a very cold house.

The floors are open to the elements looking straight under the house and they have gaps between the boards. This means cold winds come straight in. Hence the thermal underlay and the laminate flooring to go on top :).
This entry was originally posted at http://beren-writes.dreamwidth.org/300745.html.
Tags: info: house, info: nanowrimo
Subscribe